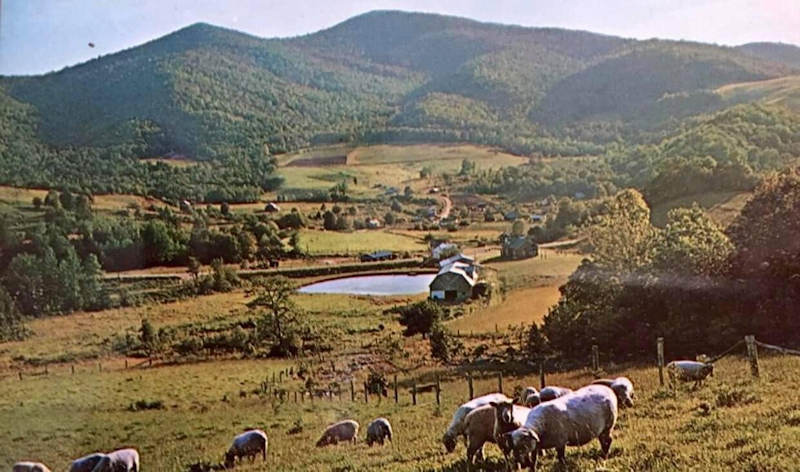 Although the first Southern ski area was Cataloochee, development in earnest began in 1965 with the opening of Bryce Mountain, VA. For the next five years, the development of new ski areas proceeded at a rapid pace. Seven Devils opened in 1966 with Beech Mountain following in 1967. The birth of the Sugar Mountain Company began with the purchase of 2000 acres of land by Retired General Alexander Andrews and Albert Johnson. They combined their acreage with 900 acres owned by George McRae a tract owned by Julian Morton and two Norwood Hollow farms to form what was to become Sugar Mountain.

Actual construction of the resort started in early 1969 with the ski slopes opening for the first time on December 19, 1969. Real estate sales took off. By 1972, lots were developed in Western Highlands, Mushroom Park and Grouse Forest. Many of the original condominiums, including Briarcliff,  Snowlake, Hemlock Nob, Bee Branch, and the Timbers, were built and sold.

By 1973, construction of the Sugar Hollow Golf Course and the Glen condominiums had begun. Play on the golf course began in Spring of 1974. As construction at the base of the mountain was winding down ground was broken on the resorts most ambitious project to date – the 300 unit Skyleaf condominium and convention hotel. Access to Skyleaf was to be by a 12 minute ride on the Sky Tram from the base parking/reception area. Shortly after the announcement of Skyleaf work began on the subdivision of 250 lots in Cloudspring Park.

With construction activity at a peak the combination of the Arab oil embargo, skyrocketing interest rates, and a warm winter was devastating. The end was near. In 1974, one of Sugars founders, Tom Brigham, left the Company. He was replaced by Davidson Potter, an officer with one of the resort’s major creditors. Potter stayed at Sugar for less than six months. In the Spring of 1975, Roger Hard, who had guided Beech Mountain through its bankruptcy, became Sugar’s new President.

Although Hard had great hopes for Sugar, he was not able to obtain financing to make it work. In March 1976, Atlanta developer Earl Worsham bought controlling interest in the Company. By May, the resort closed its doors for the first time. Maintenance and security were non-existent. In June, the resort re-opened under the management of Diversified Equities Limited from Mississippi. DEL was not able to put together a workable plan and in the Fall of 1976, the major creditors leased the ski operation to Blue Knob Recreation, Inc.

Although the 1976-77 ski season under Blue Knob’s management was successful, it was too little too late and the Company declared bankruptcy in 1977. The ski operation continued the following season under the guidance of Blue Knob. The POA was now handling the management of community services, including security and maintenance.

In 1978, Dale Stancil and Ray Costin purchased the recreational facilities, along with several tracts of adjoining property, from the bankruptcy trustee. During this same time frame, the other assets of the Company were sold to different investors. Although some of the private nature of the original development was lost, hopes were high that some stability was returning to Sugar.

Less than two years later in 1981, US Capital Corporation announced the construction of Sugar Top Resort at the Peak of Little Sugar Mountain. The result was a 10 story, 320 unit concrete structure that would forever change the landscape of the mountains. The project was finally completed in 1985 amidst a controversy that gained national attention and prompted the 1984 NC General Assembly to pass the first, and still only zoning legislation to affect the mountain region.

Increasingly frustrated by intense development, inability to collect assessments to pay for community services, and lack of any control over development, the Sugar Mountain Community Association unanimously voted on March 30, 1985, to seek incorporation of the Village of Sugar Mountain. House Bill 661 was ratified by the NC General Assembly on June 14, 1985, after sometimes bitter opposition from groups who felt that a “resort” should not be able to receive state funds.

A referendum was held among the registered voters within the proposed Village municipal limits and on August 27, 1985, the Village of Sugar Mountain officially became a municipality. A Village Council was elected, a Planning Board was appointed, and taxes were levied. In the four years, since incorporation the structural framework was laid. A comprehensive zoning ordinance was adopted. Bonds to pave the collector streets were approved and the General Assembly gave the Village the authority to vote on A BC matters.

In the nearly eighteen years since incorporation, the Village has continued to grow and progress. One of the most substantial moves was the acquisition of the Sugar Mountain Golf Course in 1993. The Course was purchased from Sugar Mountain Resort Inc. for $606,034.15. Since that time, the course has become recognized as one of the best in the area. At the same time, the Village also began a tennis program. The program is housed at the Resort’s tennis courts, which the Village leases from the Resort. With the purchase of the golf course and the lease of the tennis courts, the Village Council has established a Recreation Committee to oversee these and other Village recreational opportunities.

Several voluntary annexations have increased the size of the Village to include the Scotchman (Across from entrance September 1989), Sugarfoot Shops (November 1989), Sugar Mountain Village (Food Lion Shopping Center, November 1991), Grandfather Center (May 1995), and the Invershiel Scotchman, Highland House Ski Shop (May 1995) and Mountain Community Bank (June 2004). These annexations have added a good deal of retail property within the corporate limits, which in tum has provided revenue growth for the Village.

In 1989, the Village was granted ABC privileges by the North Carolina State Legislature. After being granted these privileges, the Village opened its own ABC store in Sugar Mountain Village (Food Lion shopping center). After several years of operating in this manner, the Village merged its ABC operation with Banner Elk and Seven Devils to form the High Country Municipal ABC store. The store was originally located at Tynecastle, but in November of 2002, the store was moved to a new facility at Grandfather Center and back into the Villages corporate limits.